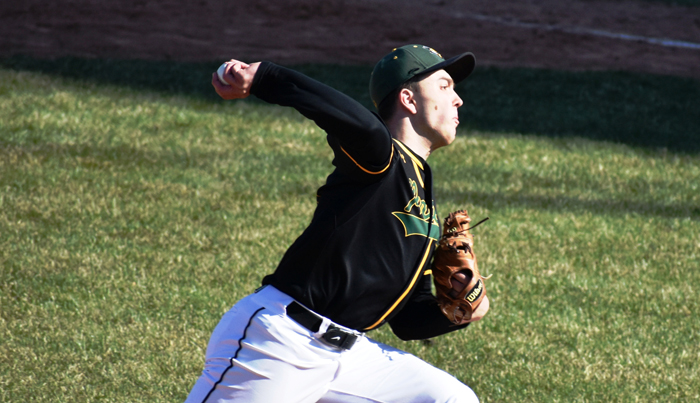 Green Bay Preble’s Max Wagner is a senior on the baseball team and a Division I commit to Clemson University. Press Times File Photo

But with each passing day athletes aren’t in school due to COVID-19, the dreams of high school seniors across the country are being dashed.

With Gov. Tony Evers recently issuing a Safer at Home order, the earliest schools can get back in session is April 27.

Last week, the WIAA also delayed a decision on the cancellation of the spring sports season.

“We all hope to get back to school and playing games,” said Wagner, a Division I commit to Clemson University. “If we get back to school at the end of April, maybe we can play a short season. In the meantime, I’ve been exercising at home, running and doing family things.”

“It’s been a good run,” he said. “With us making it to the state tournament the last three seasons, it’s been memorable. That’s one of the things I’m most proud of – our team accomplishments.”

Wagner, whose younger sister, Jada, is a sophomore at Preble, said his most memorable moment occurred last season at sectionals with a trip to state on the line.

“The whole day was memorable,” he said. “It was my most productive day offensively to date at Preble. We had to come from behind to beat Hortonville and beat Kimberly next.”

Wagner, who has topped out at 89 mph on the mound, picked up both wins pitching, had three hits – including a three-run triple – and drove in five runs combined in the two games.

Wagner said he has nothing but respect for Preble baseball coach Andy Conard.

“Coach Conard holds everyone on the team accountable,” he said. “He’s not afraid to call anyone out. Since the seventh grade, he’s been coming to most of our games to get to know us. There’s never pressure to do everything right, but he wants things done a certain way. He’s an intense coach and has a big passion for the game. I love having him as a coach. Practice is fun, and once the season starts, he has lots of stories to tell.”

Wagner played basketball his whole life but decided not to go out this past winter.

“I’ve always loved playing basketball,” he said, “but I wanted to give my full attention in the offseason to baseball. During my freshman and junior year, I played basketball, and in my sophomore year, I had shoulder surgery. I thought focusing solely on baseball might help my numbers a bit.”

Wagner said Clemson is known for playing its freshman, so he doesn’t plan to redshirt once he arrives in South Carolina.

“In their 17 games this season, the first-year guys played lots,” said Wagner, who plans to study communications. “They can see me as a third or second baseman and maybe some short. I want to play right when I get there.”

Besides Wagner attending Clemson, the baseball team already has ties to Green Bay.

Former Packers quarterback Don Majkowski, who played in Green Bay from 1987-1992, has a son, Bo, who plays at Clemson.

“Bo and I went back and forth before my official visit last fall,” Wagner said. “We had plans to meet at a Packers game, but it didn’t materialize. I got to meet him when I committed.”

Wagner’s dad is from Fond du Lac, while his mom is from Green Bay.

Wagner describes himself as athletic, fun and hard-working and likes watching movies, free-writing and spending time with family and friends.

“I’ll miss the people and the relationships I’ve built with the teachers at Preble,” he said.

“I try to venture out and meet new groups of people,” he said.