DE PERE-The Ashwaubenon Jaguar wrestling team stepped out of conference Thursday evening (Jan. 4) and didn’t lose a beat in defeating the Phantoms of West De Pere by a final of 49-27.

The Jaguars won 9 of the 14 matches contested.

The dual started with the 132-pound classification and Fernando Coronado wasted no time in pinning his opponent in the opening period.

Connor Ramage won a decision over Lucas Milheiser and Dawson Dembroski earned a free six points with a forfeit to give the Jaguars an early 15-0 advantage.

“Fernando and Connor got us off to a great start versus West De Pere,” said Jody VanLaanen, Jaguar Wrestling Coach. “Those two have been just awesome for us midway through the season.”

The Jaguar fans were then entertained with the most exciting match of the evening.

Zach Olbrantz (Jaguars) and Tyler Mudd (Phantoms) put on a wrestling exhibition that ironically didn’t look like it would be after Olbrantz quickly jumped out to an 8-0 lead after the first period.

However, Mudd battled back.

Both wrestlers kept accumulating points within seconds of each other with reversals, and near falls that the scoring operator was having a tough time keeping up.

Olbrantz clung to a 13-9 lead early in the third period.

A late near fall put him up 16-9 before Olbrantz won the match with a pin.

“I am super excited for Zach today,” added VanLaanen. “It was a crazy match that involved 25 points before he got the pin late. He has wrestled up for us and he worked extremely hard in those six minutes today.”

The Phantoms then racked off 21 straight points on the Jaguars to narrow the margin to 27-21 with five matches remaining.

Heavyweights Katayen Gardner and Floyd King provided some punch with both engaging in massive takedowns on the mat.

Gardner ultimately prevailed for the Jaguars in a fall late in the first period.

The Jaguars had to forfeit at 106 lbs., but had Cody Minor, and Noah Leisgang left to gather points for the team.

Both did not disappoint.

Minor dominated his opponent with an 18-2 technical fall win, and Leisgang followed suit with a 15-0 win of the same variety (TF).

The Jaguars closed out the evening with a forfeit win for Dominic Stichmann at 126 lbs.

“West De Pere closed the gap on us,” said VanLaanen. “However, we had Minor and Leisgang at the back-end of our lineup, and knew we were in real good shape. They are like money in the bank”

The Jaguars will be back in action Jan. 6 when they wrestle in the Oconto Falls Invite. 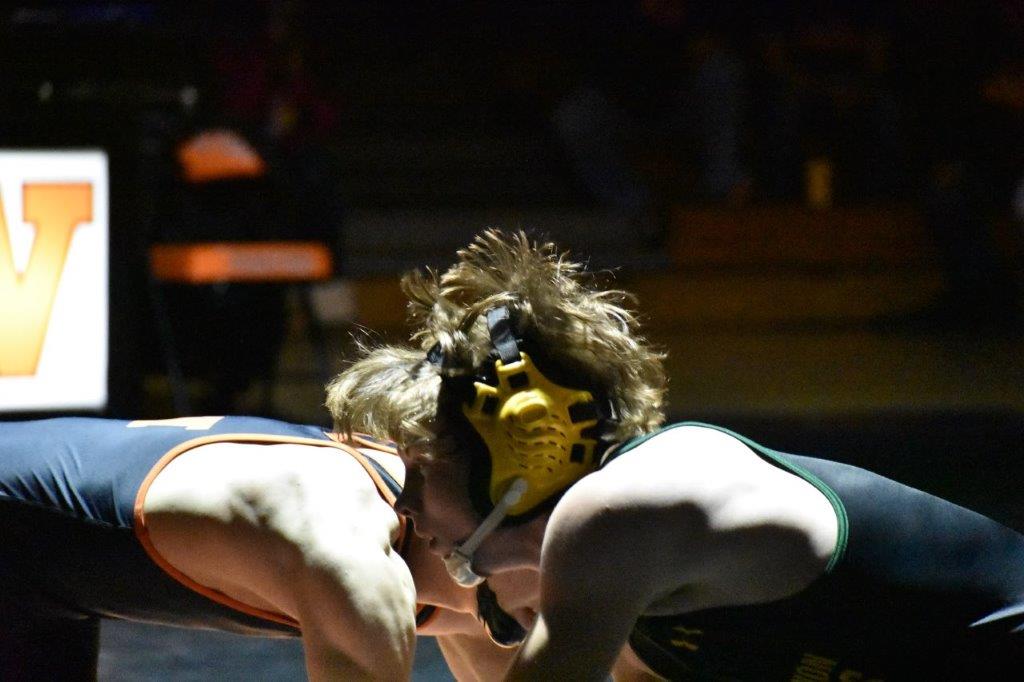